The Union was deeply saddened to learn of the passing of Kevin Bouch (class '61), brother of  the late Brendan (class '58).

Kevin died peacefully on March 19, 2021, in Haymarket, Virginia. He is survived by his wife, Eleanor: three children, Kerry, Joe, and Tom, five grandchildren, and his sister, Barbara. He was the son of Joe and Elizabeth (Betty) Bouch, and brother of Brendan, who also attended Castleknock. Brendan died in 2009, and is buried with his parents at Glasnevin Cemetery.

Kevin attended Castleknock from l954 to 1958. Those who knew Kevin said he was well liked and respected by his peers.
He was one of the star players on the junior rugby team for three years, 1955 to 1957. The Irish Times referred to him as the Tall Bouch. A classmate said he was a tower of strength, big and fast, and would move his team down the field. If he had stayed one more year he would have been on the Castleknock team that won the Senior Cup Final against Newbridge College. 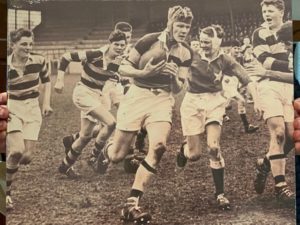 His father, Joe, died at an early age in 1945. He was one of the founders of the Rathmines and Rathgar. He produced and directed the Gilbert and Sullivan performances at the College during the 1930’s and early 40’s. Before his death, he asked that his two sons be allowed to attend Castleknock. Kevin’s mother, Betty, was an American citizen. She went to work at the embassy. Eventually she was selected to be a member as a U.S. diplomatic service. The family left Ireland in 1952, and in 1953 both Kevin and Brendan went back to Ireland to become boarders at Castleknock. During his first year, Kevin carved his name on a tree, and over the years it grew and could be seen from the driveway as people were leaving the College!

The Americanization of Kevin started when he did not return for a fourth year. He attended the American high school in Frankfurt, Germany. What a change! In 1959 his family moved to Arlington, Virginia, and Kevin attended the local high school where he played U.S. football. He then attended American University in Washington, D.C. and received a Master in Economics.
Upon graduation he joined the U.S. Air force and served in Vietnam for one year. Upon completing his military service, he was accepted into the Federal Bureau of Investigation (FBI) and was an agent for 29 years. Had some good stories to tell!

Following his retirement from the FBI, he was involved in interviewing those requiring security clearances. On September 11, 2001, he had an appointment at the Pentagon. He was late, and as he approached the building from an outlining area, he heard a plane at a very low altitude, and then felt a huge burst of air compression as the plane crashed into the building. He immediately left before the area was cordoned off.

Kevin is at peace and will be missed by his family, by his friends, and those who knew him. He had a great sense of humor. And a great memory. Probably could name all his fellow classmates at Castleknock!

He will be buried with military honors at the military cemetery at Quantico, Virginia.