According to the Registry of Births, Marriages and Deaths in Dublin, Patrick Fagan was born on March 11th 1864 in the parish of Kilcooly near the town of Trim. Trim lies 30 miles north west of Dublin in the farming country of County Meath. His birth certificate mentions that his father was a carpenter. Responses to enquiries made at the Genealogy Centre in Trim suggest Patrick was one of nine children, though that requires further confirmation. Whatever, one can reasonably speculate that a tradesman and his wife raising a family just 15 years after the end of the Great Famine might be strangers to affluence. The path leading from fairly modest beginnings to success as a senior surgeon in one of Dublin’s leading hospitals was surely not a downhill slope.

I haven't been able to uncover any information about Patrick Fagan's early schooling. Irish schools were run by the Catholic Church, and there was a strong emphasis in the curriculum on Latin and Greek classics, rhetoric, logic, mathematics and religious instruction. Between the ages of 19 and 21, Patrick spent the final three years of his secondary education at Castleknock College, a prominent fee paying boarding school on the outskirts of Dublin. At that time, full secondary education was usually completed by 18 years of age. The three year extension beyond the norm may indicate that Patrick was a promising and intelligent pupil who was sent to Castleknock after finishing a basic education in Meath in order to prepare him for a successful entry into Medical School. Castleknock College was unusually well equipped for that time to teach natural science, chemistry and physics, subjects which only began to feature in the standard school curriculum in 1878, five years prior to Patrick Fagan's enrollment. 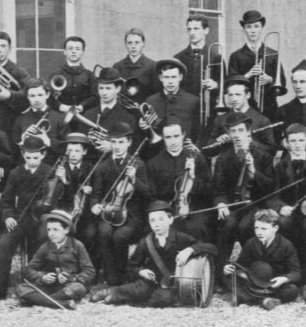 Patrick Fagan was a member of the Castleknock College orchestra (here seen standing at the centre of the second row from the back holding a trumpet). Photo taken in 1884, and reproduced in the St.Vincent's College Castleknock Centenary Record (1935)

Leaving Castleknock College, Patrick Fagan began his third level education at the Medical School of what is now University College Dublin, but which was then the Catholic University of Ireland in Cecilia St., Dublin. He graduated and was registered as a physician and surgeon on August 6th 1891 (according to the Medical Register records). The following year on June 13th, Patrick married Isabella Cowley in a Catholic ceremony which took place in Rathgar on the south side of Dublin. Isabella was the Dublin born daughter of a coachmaker who originally hailed from Liverpool in England.

Fagan's career combined teaching and surgical practice. He excelled and worked hard at both. His obituaries mention him as a lecturer in physics and natural philosophy, as the Chief Demonstrator in the Department of Anatomy, and his long term position as Surgeon in St.Vincent's Hospital, Dublin. Fagan became a Fellow of the Royal College of Surgeons in Ireland in 1896, the same year that Cyril Fagan was born.

I came across an interesting anecdote concerning the teaching side of Patrick Fagan's career. The source was "Cecilia St. - The Catholic University School of Medicine 1855 - 1931", by F.O.C.Meehan, Gill & MacMillan (publ.) 1987. In an entry for April 1902, it said:

"Cecilia St. and Irish Medicine received a distinguished visitor in the person of James Joyce. Joyce had shown some interest in pursuing a medical career ... The vistors went also to the dissecting room at the top of the building where they met two distinguished Dublin Surgeons, Arthur Blaney and P.J.Fagan of St.Vincents ... Joyce subsequently attended a few first year medicine lectures in the session 1902-3, but left for Paris in April 1903."

The rest, as they say, is history. James Joyce was by no means "distinguished" in 1902, but it interesting that the two paths should fleetingly cross. Particularly when one considers the closer relationship formed between Cyril Fagan and another bastion of 20th century Irish literature, W.B.Yeats.

The Fagan's first child Ruby was born on August 20th 1893. By the time, the second, Cyril arrived in May 1896, the family was living at 31, North Frederick St., beside Parnell Square and a short distance from Dublin's main boulevard, O'Connell St. In 1898, a second son Albert was born. He was destined to follow in his father's footsteps. After graduating from medical school in 1921, he became one of the ear, nose and throat specialists at St.Vincents Hospital.

Patrick Fagan's life was cut short when he died from a heart attack on October 10th 1910 at the age of 46.

The first obituary is taken from the Medical Press and Circular of October 19th 1910. This publication was a regular newsletter distributed among medical doctors.

"The death of Mr Patrick Fagan, Surgeon to St.Vincent's Hospital, Dublin, occurred with startling suddenness on Monday, October 10th. He had suffered from pains in the chest the previous night, but went about his usual work on Monday, attending to his patients in hospital and in private, and to his classes at University College. In the evening, however, while reading by his fire, he was seized with angina pectoris, and death occurred in a few moments. He was only forty-six years of age, and to a casual observer he presented the appearance of robust health so that the news of his death came as a shock to the profession and the public in Dublin. Mr. Fagan was for many years Surgeon to St.Vincent's Hospital and he also was Lecturer in Physics and Demonstrator of Anatomy in the Cecilia Street School of Medicine. Since the establishment of University College Dublin, he occupied the post of Chief Demonstrator in the Department of Anatomy. He was a forcible and original teacher, and to his students he was a friend and comrade. His professional friends had reason to respect him as a strsaightforward and honourable colleague. His bluff manner could not conceal his kind heart."

The second obituary is from the Castleknock Chronicle, no.XXVI, June 1911, p68-69. This is the annual school magazine from Castleknock College.

"Surgeon Fagan was one of the most promising ornaments of the surgical profession in Ireland. He had graduated in the great Medical School of University College, which now becomes the the centre of medical thought in the National University of Ireland. In that school he became a brilliant teacher and senior assistant to the Professor of Anatomy, and his services had been secured as Senior Demonstrator of Anatomy for University College Dublin

His anatomical knowledge was the foundation of a surgical career which gained him the confidence of everyone associated with St.Vincent's Hospital, where he was a respected and beloved member of the surgical staff. In his anatomical work he was surrounded by a host of students, who loved him well; but it was while dispensing his gifts as an experienced surgeon he was best known to his immediate friends. Poverty and suffering never appealed to him in vain, and he was never so happy as when at the bedside of some poor sufferer, who recognised in him a man whose sympathy could not be measured. St.Vincent's, in his demise, loses the promise of great things; but the poor of Dublin, and, indeed, Ireland, lose much more - a sympathetic and wholly unselfish worker in the cause of charity. Those who knew him best are aware that his great talent was placed unreservedly at the services of the people, and that he looked for no recompense beyond a fortuitous outcome of his kindly intervention.

Surgeon Fagan enjoyed a distinguished and growing reputation as a brilliant operator and clever diagnostician. He was a man of wide and varied general culture, highly educated and deeply read. For several years he has been on the Visiting Staff of St.Vincent's Hospital, where he was highly appreciated for his abilities and his kindliness of manner by his colleagues, by the Sisters of Charity, and by the students."

" ... or 'Paddy', Mr Fagan, of striding step and deep sonorous voice, anatomist to his fingertips and surgeon of no mean merit."

The year he became an FRCSI is mentioned in his file at the Kirkpatrick Archive, Royal College of Surgeons in Ireland, Kildare St. Dublin.

Information from marriage and birth certificates. Isabella’s father, Walter Cowley, is mentioned as being from Liverpool in P.J.Fagan’s file at the Kirkpatrick Archive.